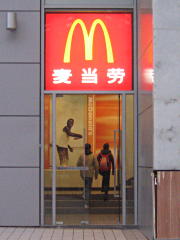 My first night in China, we decided to eat regional food. There is a unique Scottish restaurant on the Wangfujiang shopping promenade. The Chinese seem to love this restaurant’s delectable items, which center around something they call a hambaobao. The United States would love this concoction, which is two all beef patties, topped with what is called “special” sauce, layered with crisp lettuce, luscious cheese, pickles, and onions. Finally, it is topped with a sesame seed bun. It is truly a combination of the best of Scottish and Chinese cuisines.

(Please feel free to throw in your own anti-globalization rant here. McDonalds and KFC outlets appear to be ubiquitous here. I have not visited either, although I have drunk both diet Coke and regular Coke!)

For folks who do not know me, the thought of eating McDonalds in a foreign country would be a bit odd. At the risk of sounding overly elitist, I am more likely to skip a meal than grab McDonalds, especially when I am visiting a new country. For my first meal in China, Mark, Sharon, and I decided to visit Quanjude, a restaurant that specializes in roast duck. We visited the newer branch of the restaurant; it is closer to my hotel. We got into the restaurant around 5:30 pm. While we were one of the first customers and were immediately seated, there was a large group of people waiting for seats when we left.

We ordered three dishes–a whole roast duck, a beef dish, and a dish of sauteed celery. The celery was tossed with oil, peeled walnuts, and red beans. The beef dish was rich and tender. However, the star of the meal was the duck. The skin was crisp, and yet it melted in your mouth. The meat was tender and lean. Unlike most duck meat in the United States, which is generally darker, this mean was pale but still flavorful.

The duck was sliced in front of our table. It was served with pancakes, sauce and chives. We also order some sesame rolls and formed small duck sandwiches with those as well. It was a treat, and the culinary highlight of my trip so far. The restaurant hands out a commemorative card for every duck sold. Our duck was the 1,150,292,355th duck sold since 1864. 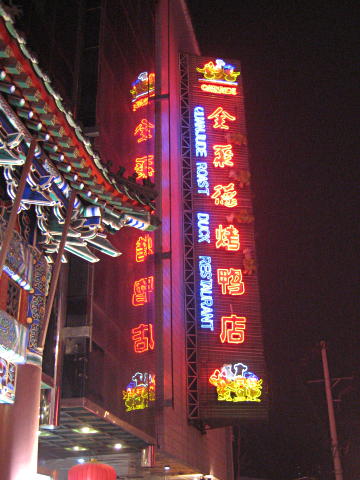 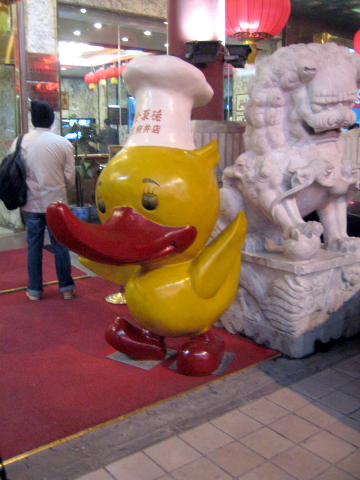 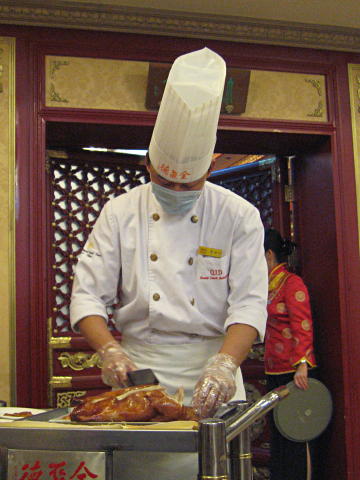 After dinner, we walked around a small market by Wangfujiang. Small food stalls are scattered throughout the area. The food on the sticks are scorpions and seahorses. 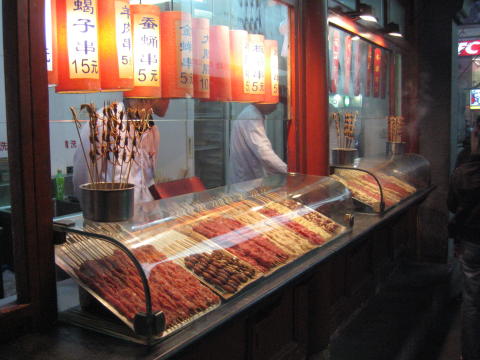 Yesterday, I visited the Forbidden City, and this afternoon I fly to Shanghai.