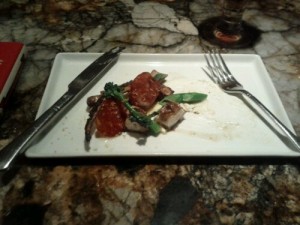 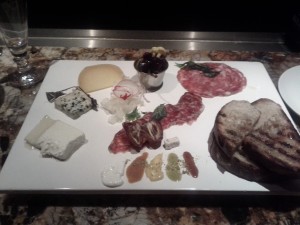 I went to Fishtag last night for the second time. Fishtag is a relatively new restaurant on the Upper West Side. It’s owned by Michael Psilakis, a successful restaurant owner and chef. He is one of the owners of Anthos and the owner and chef at Kefi; in addition to owning Fishtag, he is also the executive chef. Ryan Skeen is the chef de cuisine; he’s an expert chef who makes innovative and tasty food. Two of the dishes we had last night are pictured above. One is the smoked octopus with chorizo with a potato puree. They did a great job of cooking the octopus perfectly: crisp on the outside and creamy on the inside. I ate most of the dish before taking the picture, because I like eating food more than I like taking pictures.

The second photo is the charcuterie and cheese board; as you can see, I ordered three cheese and two meats. They presented the cheese and meats with five different sauces, olives and pickled vegetables, a date, and perfectly charred bread. This was one of the most elegant presentations of meat and cheese I have ever seen; I don’t believe anyone in New York City is doing anything as pretty right now. When Patti joined me, she ordered another set of meats and cheeses; that presentation was totally different yet equally beautiful.

We had a few other dishes that evening. I loved the chopped chicory, wild argula, and bulgur salad. Another exciting dish we had was something the kitchen was working on: head cheese served with shiso over a hearts of palm puree. When you bite into this dish, all of the flavors blended seamlessly–it makes you think that there is no way any of the ingredients should ever be removed.

In addition to the extensive menu, Fishtag has a great wine, beer, and cocktail list. I recommend checking out the dinner menu and the “appetizing” menu [warning: PDFs]. Hours are on the Fishtag website. Fishtag is on 79th Street, just off of Broadway. For out-of-towners, this is very close to the Museum of Natural History and just up the street from Lincoln Center.