Before joining in Google in December, I decided to do a bit of traveling. One of the places I visited was Las Vegas. I had heard a lot about Vegas from many friends; it seems to be a love-it/hate-it type place. One friend described it as a “cultural wasteland.” Another friend described the ideal trip as no more than two nights–fly in one evening, spending one full day there, and leaving on the third day. I decided to stay four days.

Las Vegas reminds me of a theatrical set; there is a flashy, shiny veneer on top of rough poured cement and two-by-fours. The decorations are reminiscent of famous places, but they simply don’t match. For example, consider this fountain which is clearly influenced by Trevi Fountain in Rome: 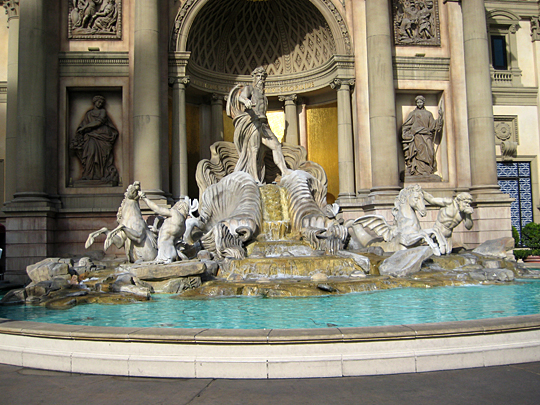 The kitschy theme continues along the strip. Consider this image of New York, New York: 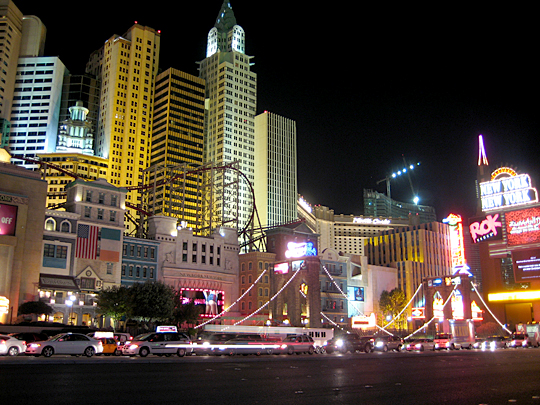 As someone who lives in New York City, this casino hurt me. The Brooklyn Bridge is reduced to a flashy venue for advertisements; instead of dazzling people with its majesty and grandeur, the version in Vegas is nothing more than a scale model with neon. What is supposed to be the Chrysler Building is unrecognizable. The real building is a elegant and stunning example of Art Deco architecture. The Vegas version is a joke.

And don’t get me started on the Vegas version of the Eiffel Tower: 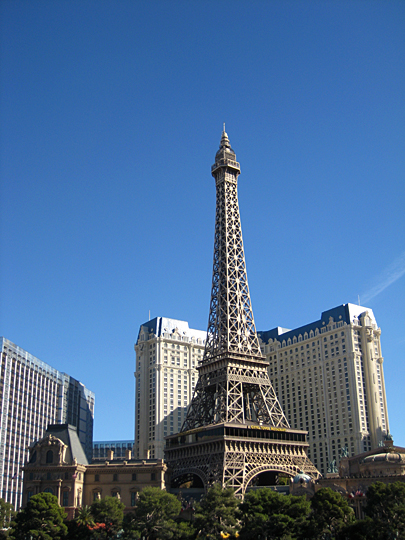 I stayed at the Planet Hollywood, which was perfectly acceptable as a hotel. It was $100 per night, but then they gave me $40 for “gas money.” Vegas has some issues with occupancy right now; the city felt empty. 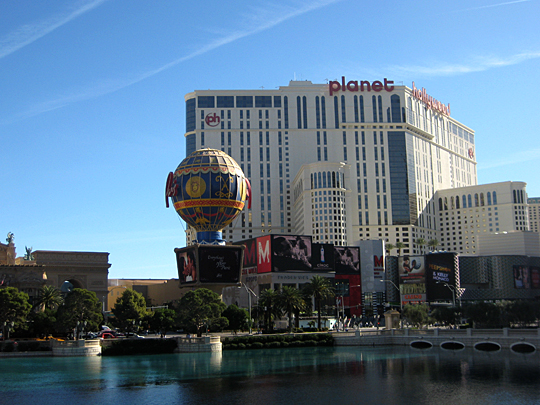 On the way up to the hotel room one night, a woman walked up to me near the elevators and said, “How about $700 for 30 minutes?” Of course, I answered, “I think I’m worth more than that,” and walked away laughing. Incidentally, don’t stay through the time share presentation at the Hotel. It’s boring, too long, a hard sell, and most importantly, not worth $250 in chips.

The great parts of Las Vegas happened when the locations did not try to mimic another city or location. For example, the Bellagio was beautiful and elegant. I loved the water show in front of the casino. 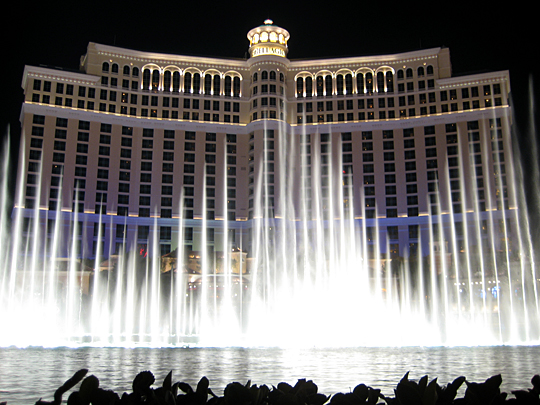 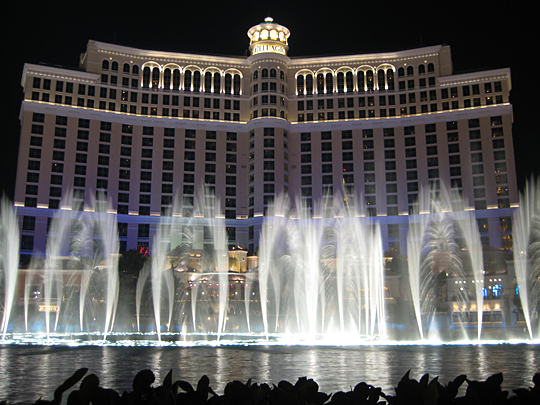 I also loved the Chihuly installation in the lobby. 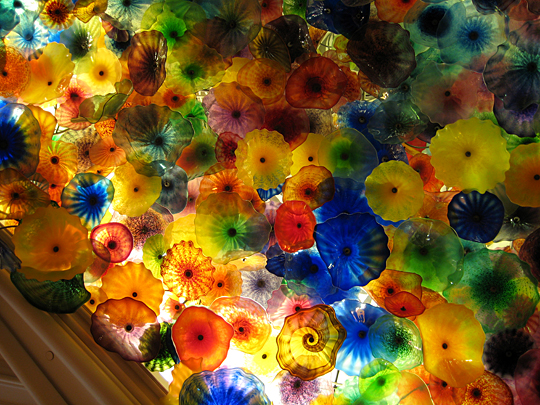 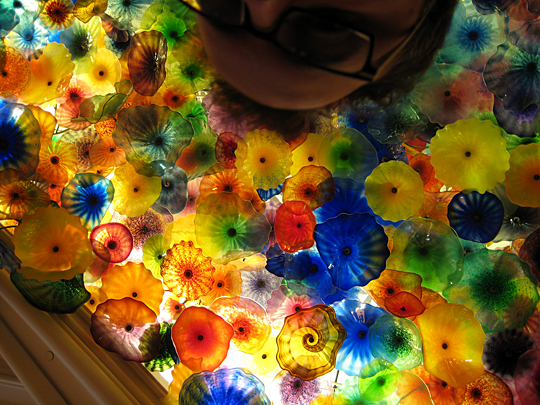 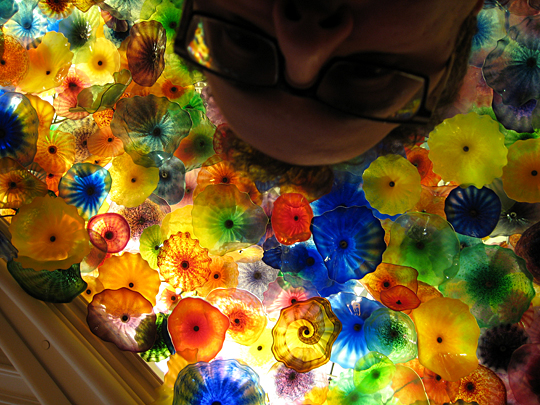 The Bellagio is home to a Cirque De Soleil show, O. A couple of friends recommended that I go to one of their shows, and I’m so glad I took their advice. (Thanks, Kristen; thanks, Todd!) This show was a spectacle on so many levels: it was artistic, athletic, funny, and surprising. The show has a stage that acts like a Trivial Pursuit piece; as each of the slices lower, they dip into water. The performers fly above the stage and plunge into the water; they dance with fire, and they throw each other across room. It was an amazing show, and if I had just seen that show it would have made the trip to Las Vegas worthwhile.

Another place where Las Vegas shines is in the food. On the low end of the scale in price but not enjoyment was In-N-Out Burger. There are no In-N-Out burgers in the Northeast, so I don’t generally have an opportunity to visit them. There burgers were some of the best fast-food burgers I have ever had. The most notable part of the burgers was the freshness of the lettuce and tomato. For most fast food joints, the lettuce and tomato are generally worth ignoring. But for In-N-Out burger, the lettuce was crisp and the tomatoes were bursting with flavor. I had a great time. 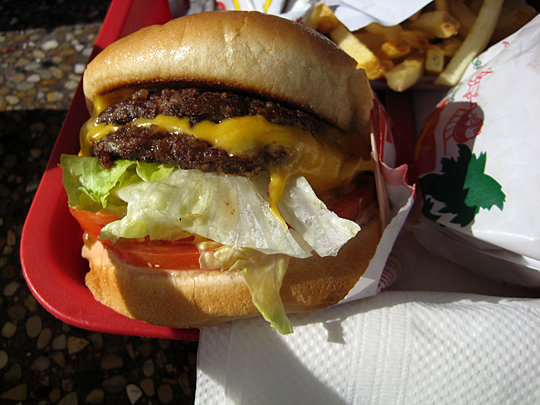 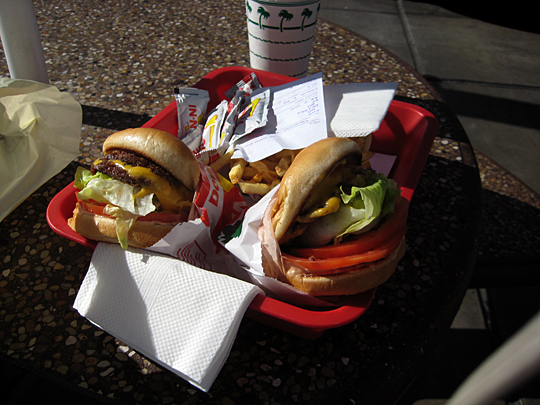 I have a couple of friends who work in the Batali/Bastianch restaurants in Las Vegas, and their food was kick-ass as well. Zack Allen is the Executive Chef of their restaurants there; he had previously worked at Otto in New York City. He is a brilliant chef whose talent for food is only matched by his organizational and management skills. The one dish I had at B&B that rocked my work was a single large ravioli filled with liquid egg yolk. It was rich and decadent. I believe Chris Crocetti’s title is General Manager. He is also a warm and terrific person who hails from New York, and he works hard to make sure that his customers have a enjoyable meal. I had drinks one night at the bar and ate at the bar another night. The bartenders were friendly and knowledgeable. (I was not surprised; the bartender I chatted with had come from working at Babbo in New York City.)

I also ate at L’Atelier De Joël Robuchon. Joël Robuchon is a famous French chef; this restaurant is his “causal” cozy dining establishment in Las Vegas with a 36-seat bar and an open kitchen. The staff here was the epitome of French service: friendly yet reserved and knowledgeable without pretension. It was a feast for the eyes as well as the stomach; the open design allowed me to witness the calm, quiet ballet of the kitchen. The dish I remember most was a sous-vide poached langoustine that was then flash fried in a light pastry with sage and a dollop of basil pesto. It had a rich flavor that managed to complement, not overwhelm, the delicacy of the shellfish. (I found a photo of the dish on flickr; the poster enjoyed the langoustine, but was not as impressed with the restaurant as I was.)

I’m not sure I would want to go back to Las Vegas, but if I do, my friend’s advice about only staying for three days is worth taking.