It’s been a while since there have been photos posted on the blog. I’m still taking photos, but unfortunately I haven’t had the time to edit, crop, and post the photos. Until now!

Before I left for New Orleans, I decided to make aged eggnog. I used the recipe for Best Eggnog from chow.com. What’s the difference between aged eggnog and regular eggnog? Like a traditional eggnog recipe, it’s made with fresh eggs. Unlike a traditional recipe, aged eggnog is aged for at least three weeks and up to a year.

(As an extra safety element, I took the precaution of thoroughly sanitizing the storage jar I used to store the eggnog. Given that the final mixture is highly alcoholic, I think this was probably an unnecessary caution. But it couldn’t hurt.)

I decided to start with some of the best possible ingredients available. 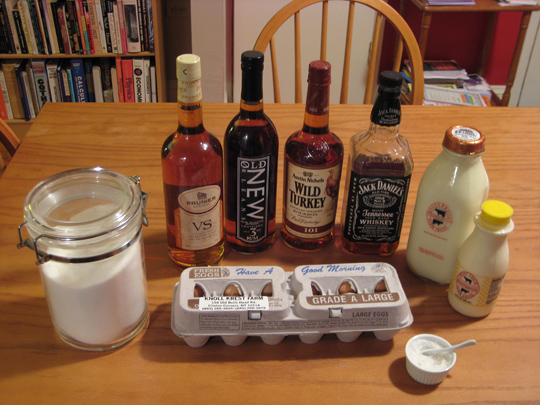 I wasn’t sure exactly what liquors to use, so I reached out the Lenell Smothers of Lenell’s in Red Hook, Brooklyn. Lenell is an expert when it comes to all things alcohol. Her store is famous for its enormous selection of American Whiskey (especially Bourbon) and exotic liquors. It’s worth a trip to Red Hook; in fact, it’s worth a trip to New York City if you don’t live here.

Lenell and I discussed the eggnog before making selections. I didn’t want to go with any liquors that were extremely expensive or with an overly strong flavor that would overwhelm the eggnog. We decided on Wild Turkey Bourbon, Old New Orleans Rum, and Prunier VS Cognac. All three have rich, complementary flavors. In the photo, you’ll also notice a photo of Jack Daniels. The eggnog requires a bit more whiskey than a single bottle of Wild Turkey, so I added a bit of Jack Daniels to complete the liter. I don’t think it will be a problem.

I picked up milk and cream from Ronnybrook at the farmers market in Union Square. Ronnybrook is a farm in Hudson Valley; they produce some of the best milk, cream, and butter I have ever tasted or used. One of the reasons why their products taste so good is that they do not use ultra-high pasteurization. Their milk is still pasteurized, but their pasteurization takes longer to process and bottle and does not have as long as a shelf life. The eggnog was made the same day I purchased the cream and milk.

The eggs are from Knoll Krest Farms in Clinton Corners, NY. Like Ronnybrook, they also set up a stand in Union Square Farmers Market. I picked up a dozen eggs from them the same day I made the eggnog. 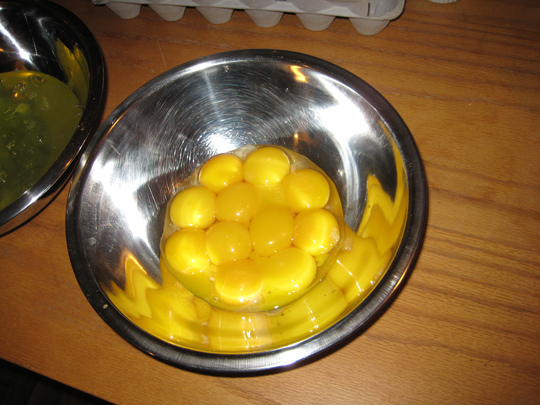 The eggs from Knoll Krest Farms were fresh. Really fresh. Separating eggs when they are fresh is a breeze, and I went through a dozen eggs in no time. (I ended up breaking one egg yolk, which is why there are only 11 yolks in the photo.) 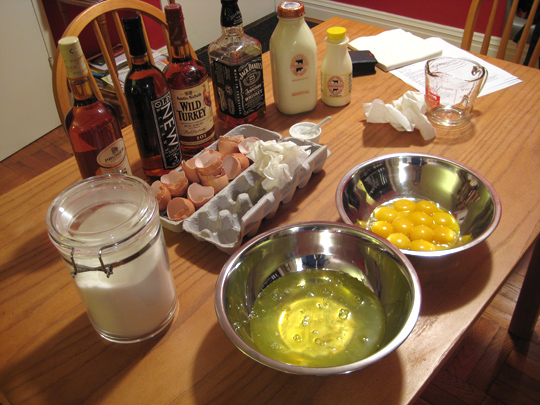 I had a bunch of egg whites left over, so I had a couple of egg white sandwiches for breakfast in the next few mornings. 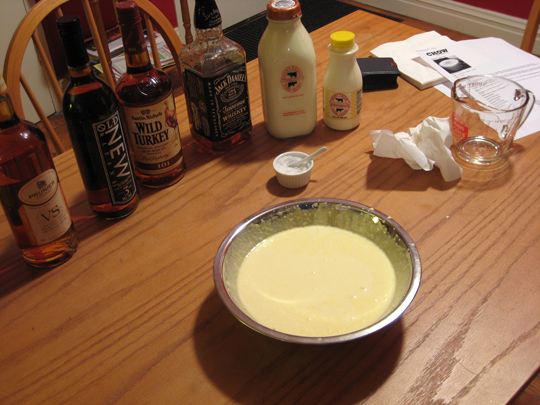 The first step of the eggnog after separating the eggs was blending it with two cups of Domino’s granulated sugar. As you can see from the photo, the sugar significantly lightens the color of the egg yolks. 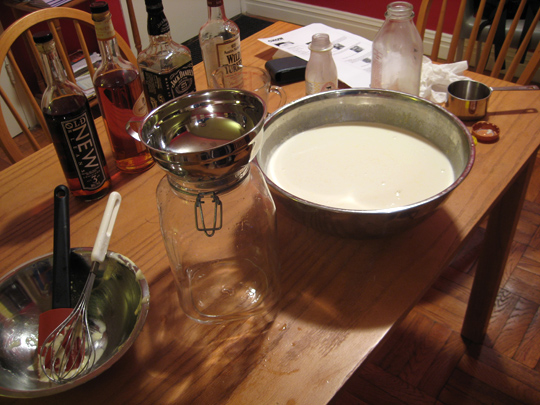 Then I added the milk, cream, and a pinch of salt to the eggnog. I had to switch to a larger bowl. You can also see the setup for what came next: the bottling funnel helped me get the eggnog mixture into the jar. 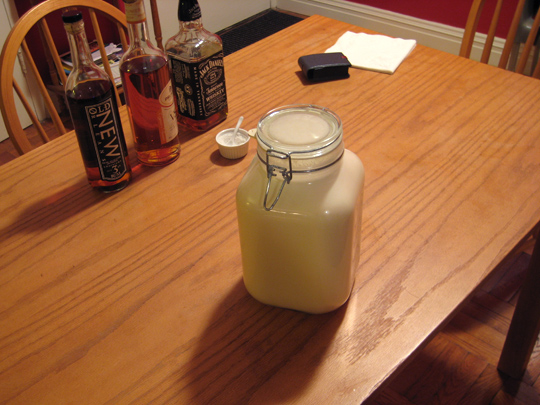 The finished eggnog perfectly filled my jar. A bunch of liquor was left over; it won’t go to waste. I wrapped the jar in foil and put it in the back of the refrigerator. (I’m not sure the foil is necessary, but again, I’m trying to follow the recipe.)

I’m keeping the eggnog in the back of my refrigerator; I check it every week or so. I’m not sure if the eggnog needs to be refrigerated at all due to the high alcohol content, but I want to stick to the recipe at least once before playing around with it. 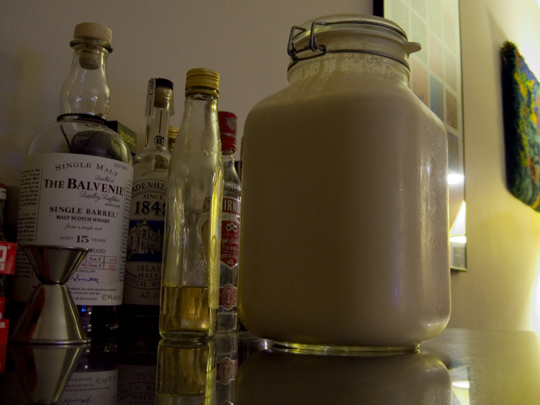 One week after preparation there’s nothing strange growing in the eggnog and it looks pretty darn good. The mixture smells wonderful and it is staying homogenized.

I plan on serving the eggnog near the end of the year. I’m not sure if I will serve it over ice or straight up, but on request I will top it with whipped egg whites and nutmeg. Only four months to go!