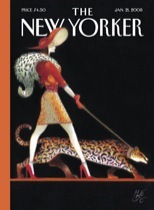 The January 22nd issue of The New Yorker (last week) has an in-depth profile by Lawrence Wright on the Director of National Intelligence, Mike McConnell. All executive-branch intelligence departments report to McConnell in one way or another. “The Spymaster” discusses many topics including: the use of torture, defending the U.S. infrastructure against cyber-attacks from foreign countries, FISA, security screening, the state of IT in our intelligence agencies, and the balance of privacy versus spying. I was not able to find an online version, but it is worth picking up a copy at your local newsstand or visiting the library. (If you decide to read this issue, also check out article on the MySpace hoax and subsequent suicide.

Some quotes from the McConnell profile include:

Wright also briefly discusses his own experience of being tapped by the U.S. government and visited by the FBI. McConnell’s response, while noncommittal, is quite interesting.

The article is 18 pages and required reading for anyone interested in U.S. policies regarding spying and privacy, and the agencies responsible for implementing those policies. It’s thought provoking and provides valuable insights into the man most responsible for spying in the world.

I originally submitted this to Slashdot, but they didn’t run the piece. Today they ran a one paragraph story on a one screen response on arstechnica.com to a single quote from the 18-page New Yorker article. Not surprisingly, The New Yorker article is better than either the Slashdot or ArsTechnica pieces. It has better writing, more sources, a higher quality of analysis, and a broader scope.