The last evening I was in Montreal I ate at Joe Beef. Joe Beef was recommended to me by Marc at Au Pied de Cochon when I ate there the previous evening. It was a wonderful experience. I stopped by the restaurant at around 9 or so, and the staff was kind enough to squeeze me into the bar. It’s a small but very pretty space, with a large chalkboard listing all of the dishes and wines by the glass and bottle.

Working the bar and shucking station was one of the owners of the restaurant, Fred Morin, and we chatted throughout the evening. Later in the evening, his fiancée/co-owner Alison Cunningham stopped by. She was working at the restaurant next door. Along with David McMillan, they also own a total of three restaurants side-by-side.

I started out with a bunch of oysters from Prince Edward Island and the northeastern United States and followed it up with a large portion of sweetbreads and sausage served over spätzle. Sweetbreads are offal, and I think this makes may people nervous about eating them. However, I believe this preparation could convert almost any hater of organ meats. The meat was crisp on the outside and warm on the inside with delicious flavor. The sausage and spätzle were good complements to the sweetbreads in both their flavor and texture. It was a warm and hearty dish, and it provided good protection against the cold.

Like Au Pied de Cochon, the folks at Joe Beef were passionate about their jobs. They had a love of food and wine, and it was a lot of fun enjoying dinner there. Fred is a fantastic chef and well-respected by his peers. As I was leaving and the restaurant was closing, he was welcoming other chefs into the restaurant. Some of them had been guest-cooking at other area kitchens, and he fired up the burners late at night to cook for both the out-of-towner and local chefs.

The other customers of the restaurant are also fun and gracious. I spoke with a local wine/liquor distributor named Paul throughout the evening. At one point, I admired his Homer Simpson bottle opener–every time it’s used it says, “Mmm… Beer. Heh heh heh heh. Yes Oh Yes! Woo Hoo!” Despite my protests, Paul insisted on giving it to me!

I left my contact information with the folks I met there, and I hope they reach out to me if they ever visit New York City.

I don’t have the best photos from Joe Beef, since I try not to use a flash inside of restaurants. (It’s bad enough that I take photos at all.) Regardless, below is a picture of my main dish and the general decor behind the bar. 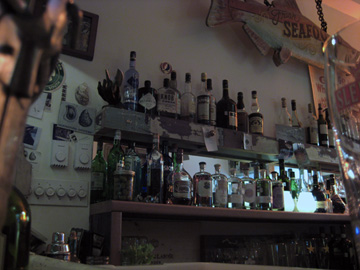